"Well, my art career started in 1958 when I won an art competition for a drawing of Little Red Riding Hood.

"I was five years old, and totally besotted with drawing, but more so, colouring-in. Every week my mother would buy me a colouring-in book, and I had to complete the book before she'd buy me another. I loved these books... I remember flowers, animals and little children frolicking.
One day, she bought home a book of trucks. I was shocked. All straight lines and angles... no curves. I did not want to colour them at all. I asked her why had she bought me a 'boy's' book? Poor mother, she replied that all the 'girls' books were sold out. What a precocious brat I was!

Sadly, I do not have that first masterpiece, Riding Hood. (Above is a fake, done from memory.) No one kept it. In later years Mother said it was not very good!! I'm glad no-one told me that at the time, as I was convinced I was a master. From then on I was going to be an artist when I grew up.

This is a self fulfilling prophesy: if you think you can draw, then you do draw, which means you practice, and so you get good at drawing. Simple!

My next experience with the art world was at the age of 8. My family visited a neighbour who had a garage studio. He painted horses. They looked very impressive. I don't think I ever knew his name, and we never returned. But those horses I will always remember. On reflection, he might have influenced my next stage in art appreciation: horses.

In my tweens I drew horses. I painted horses. I read about horses. I studied their anatomy. In fact I was a total pain in the neck, and I'm surprised that my family didn't disown me.

Of course, I was not the perfect student at school. I would doodle while listening to the teacher. (The point here is that I was listening!!) The teacher would notice my eyes down, and a pen in my hand. She would then confiscate my doodle. She kept a years worth of doodles, then sent them home to my parents to demonstrate my bad behaviour. My father leafed through the pile of doodles, and said: "Shirley, you can do better than these! They are not very good."  AHHHH! I couldn't win.

My twin sister and I were always in the school art room. We were there at every opportunity, and for me, pottery soon became a passion. I 'majored' in pottery for my end of school art exams, and my father took over my wheel after I left home. He went on to do many thousands of pots and ceramic sculptures. (www.crackpottery.com)

My twin sister, Carmel James, and I wanted to be art teachers. At the time, there was a very generous scholarship plus living allowance. In fact, the government would pay us to do the course. So we both applied, and it was on a first in, first served basis.

On the morning that we were to receive our Higher School Certificate results, I took the train into town with the application forms. I positioned myself nearby the technical school's admin office, and phoned Carmel who was waiting at home for the postman to arrive. She opened the letters... hooray, we both did really well!... I filled in the final marks onto the forms and they were duly delivered. Needless to say, we got in.

I loved art school: there was painting and life drawing, sculpture, jewellery making, photography and great company. But my frustration was with painting. We were given no instruction. Just left to our own devices. So many of us snuck off to the pub and enjoyed our painting classes from a distance.

I moved out of my parents home, and moved into an ex-brothel with four girls and one boy.
We didn't know about the brothel thing until a man knocked on the door and asked "Are you working tonight?" We assured him that, no, we were not 'working', and closed the door. Suddenly the light dawned... that was why there were so many bedrooms in the house... and two outside bathrooms, accessible by two stairs. It was a purpose built brothel and had been a part of the infamous Chapel Lane ganglands not-so-long ago.

My poor parents were dismayed. They tried to talk me into returning home, and when I refused, they bought a house in a nearby respectable area for me to rent. So myself and a girlfriend moved away from the red light district, and moved into a small cottage in Hopetown Street, Newtown. It was not suitable for painting, so for a while my 'practice' suffered.

Seb, as he was known then, was my boyfriend since I was 15 years old. We decided to get serious and move in together. The little house would not do, as my parents visited from time to time. (In the 70s one did not live in sin!) So we rented a flat in leafy Mosman with beautiful city views. I painted a little, unsure of any direction.

After two years at 'fine art' school I switched to graphic design. What a change! We studied colour, tonal values, hues. We painted shades and tints, colour wheels and so on. And this was in the first week! Suddenly I had found my niche. I loved typography, printing, advertising, logo design. It was a career I knew I could handle... in fact, excel.

My first design job was for a huge American insurance company (Combined Insurance). I was given a top floor office, next to the CEO. My job was to hand draw the sales newsletter every week. Those were the days of letraset and rapidiographs, portraits and caricatures! It was two years of light weight fun, was well paid, but I could not see any future as an artist in such a company.

I applied and was accepted into Waltons Advertising as a layout artist. This involved creating preliminary pencil sketches of the newspaper ads: usually it was a whole page, and sometimes one, two, or three columns. The text and the product had to be illustrated, even the heading was hand drawn. When finished, and approved for creativity and suitability, it became the central 'blueprint' on its journey through the various departments of an advertising company. It was photo copied and delivered to many people: photography: copy writing: typography: and finished art.

We saw the future!

We used tracing machines for resizing text and photographs, which gave us the idea for the computer. 10 years before it appeared we often discussed the possibility that one day we would do the layouts on a TV screen!!! So when Apple produced its first little box, we all just nodded and said about time. Although I was annoyed it did not print out from underneath. Why a separate printing machine? Why not have an all in one? They still don't have that, today, in 2011.

My final working-for-someone-else phase finished with two years in a graphic design studio. There I was creating logos, brochures, labels and marketing material. I was well paid and learnt a lot at John Brain Productions.

Self employment at last

I started my own company in 1978, with my husband Seb. His real name is Bob Peters, and you can see his amazing photography at www.bobpeters.com.au.
We did graphic design and photography to this day... although my painting is now almost full time, and the graphic design has almost disappeared.

Children's Book Illustration
I was lucky enough to meet and work for Margaret Hamilton. She became a book publisher, and gave me a start in the publishing field. I did many young reader books (e.g. Mervyn's Revenge), a few picture books (e.g. Amy's Bath), and I wrote and illustrated one non-fiction (The Graphic Design Book).

We have two children, born 1982 and 1983. Natalie and Mitch are wonderful human beings, and are both successful and a constant joy.
Natalie is a journalist newsreader for a top Sydney radio station: 2GB, and Mitchell has his own building company that is growing every day.

My darling husband has suffered a stroke in April 2010. His busy photographic life is now only half pace as he tries to recover a damaged left half of his body. The stroke was caused by his camera bag's strap pressing against his neck. It slowly crushed his carotid artery, until one night, bang, the artery closed up completely and stopped the blood flow reaching his brain. No other indicators. He had low cholestrol, low blood pressure, no diabetes etc. Such bad luck!

We have sold our city home and moved to the rural outskirts of Sydney. Mulgoa is now our home, and we have kangaroos in our backyard!
Currently renovating a large storage shed to become a new studio.

Welcome to my blog.

Jump to these Pages 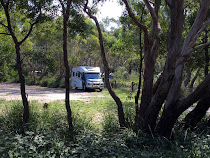 Best way to travel and see the country!

Visit my web site to see all my art. Prices are there too. 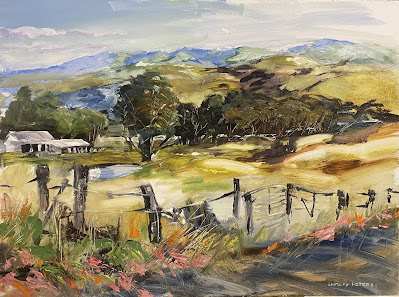